Unsustainable? Can The Music Industry Keep Growing When It's Artists Are Starving?

"A large percentage of musicians that you know and love are likely living hand to mouth" said Shirley Manson, lead singer of Grammy award-winning band Garbage. "So many of the artists that we revere and hold dear throughout history would have been utterly destroyed by this system entirely. Musicians cannot survive without being paid fairly for their music."

Juxtapose that sad state of affairs with the fact Goldman Sachs forecasts that the music industry will grow in twice the size by 2030 to reach $142B annual revenue. That's because the primary growth driver in the music industry is streaming, which as of 2021 accounted for 83% of recorded music revenues according to RIAA.

Streaming is great for the industry but terrible for the artists on which it relies because it pays the least to the artist of any form of distribution today or at any time in the last 70 years. Looking at the ten most popular streaming services ("PPSs") in the world, the average collective "pay per stream" (PPS) value sits around $0.0071. Additionally, the PPS value is divided between the rights holders – and the artist is rarely ever the lone rights holder. Generally, the stream is split between three types of copyrights: recording rights, performance rights, and mechanical rights. The largest chunk of money is attributed to the recording rights (80%), which are divided between the record label (64%) and the recording artist (16%). 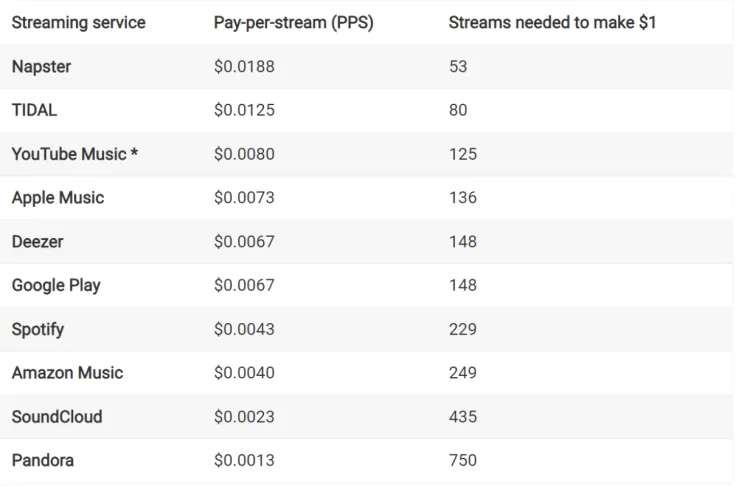 Vinyl Records to the Rescue?

With one stream earning them a fraction of a cent, musicians resurrected vinyl records – buying them from record presses and selling them to fans at their shows. Ten years ago there were less than 1M vinyl records sold in the U.S., but by 2021 that number had grown to almost 42M vinyl records and sales topped $1B for the first time since 1986. 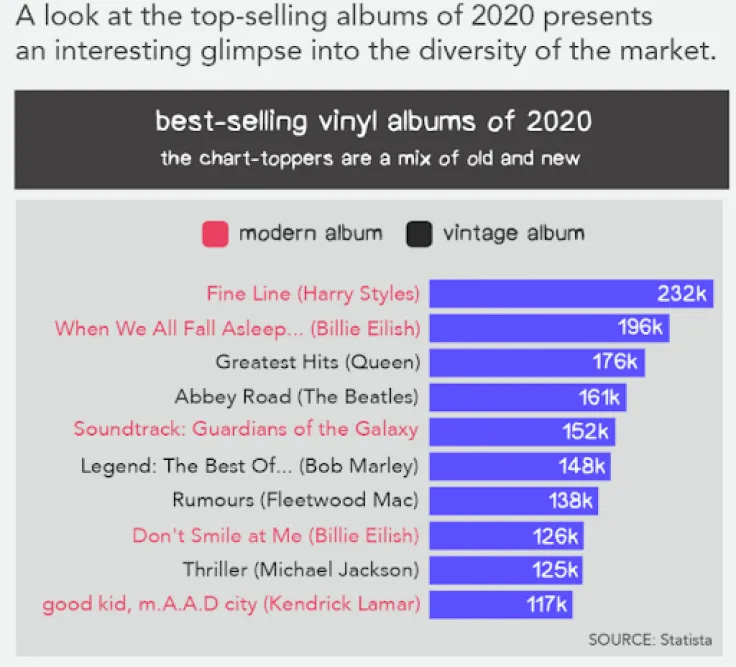 While $1B is small relative to the $15B in streaming revenue in the U.S. in 2021, the key difference is in the profit retained by the artist. A vinyl record costs ~$7 to manufacture, and a band typically sells it directly to fans for $25 – good for $18 in profit. A band would have to amass 450,000 streams on Spotify to match the profit of selling just 100 vinyl records. Demand for vinyl records has reached the level where big box retailers like Walmart and Target now have vinyl record aisles again.ChartDescription automatically generated

Contrary to what one might think, this boost isn't driven by Boomers feeling nostalgic for the skips, crackles and pops of vinyl. A 2019 YouGov poll found that 31% of adults in the US are willing to pay for vinyl, and the numbers are pretty consistent across all age demographics. Further, a look at the top-selling albums of 2020 shows an even split across modern and vintage albums.

Sadly, demand has outstripped supply and record presses cannot keep up. Currently, the minimum order is 1,000 discs and the lead time is a whopping 14 months. The situation is so dire that Jack White of the White Stripes and owner of Third Man Records has penned an open letter to the major record labels – Sony, Universal and Warner – pleading with them to invest in record presses.

"To be clear, the issue is not big labels versus small labels, it's not independent versus mainstream, it's not even punk versus pop," said White. "The issue is, simply, we have all created an environment where the unprecedented demand for vinyl records cannot keep up with the rudimentary supply of them. In this spirit, I turn to our collegial big brothers in the music world, Sony, Universal, and Warner, and politely implore them to help alleviate this unfortunate backlog and start dedicating resources to build pressing plants themselves."

"I've been a musician all my life" said Scott Arey, CEO of Community Musician. "It's never been easy to put food on the table as a musician, but now it's almost impossible."

Arey knows from experience – as a young musician, he signed with Warner Music and began touring as a warm-up act for the Indigo Girls, but he quickly discovered he couldn't make enough money to pay his bills.

Arey decided to pivot towards a career in finance, allowing him to fund his projects in the music industry which include composing and recording 60+ songs in commercial releases with two different bands, performing live on stages around the world, owning six recording studios (which he built himself), owning a CD replication business, and owning a "Craig's List for Musicians" with 150,000+ members in the early 2000s. He has always kept one goal in mind: ensure that the artists earn their share of the profit.

This led Arey to develop Community Musician, which is still in the early stages of business. Currently, a patent-pending product called Collectible Music Cards is being piloted with a relatively small number of artists, but the early indicators are very positive. The company can produce its Collectible Music Cards at a fraction of the price of vinyl records, in addition to having a smaller environmental impact. Typically, the cards are produced in batches of 200 with a lead time of less than one month. The fan who buys them after their favorite artist's show can enjoy both the collectible artwork of the band as well as the convenience of "tap to play" on their phone. Once the card has been tapped, the user can play it from their phone any time they want with all the convenience of the streaming platforms. Most importantly, the fans know that they're supporting the artists they love who keep the bulk of the profit since the transaction occurs outside the app stores.

"I've been working on this problem for 25 years – how to help artists make enough money to support themselves through the art they create" said Arey. "Not every artist will be a superstar – but with some persistence, a bit of talent and encouragement they will produce good art that the fans they develop will love and support financially. We just need the businesspeople and platforms that create no artistic products or value to get out of the way and if they don't, we're going to push them out."